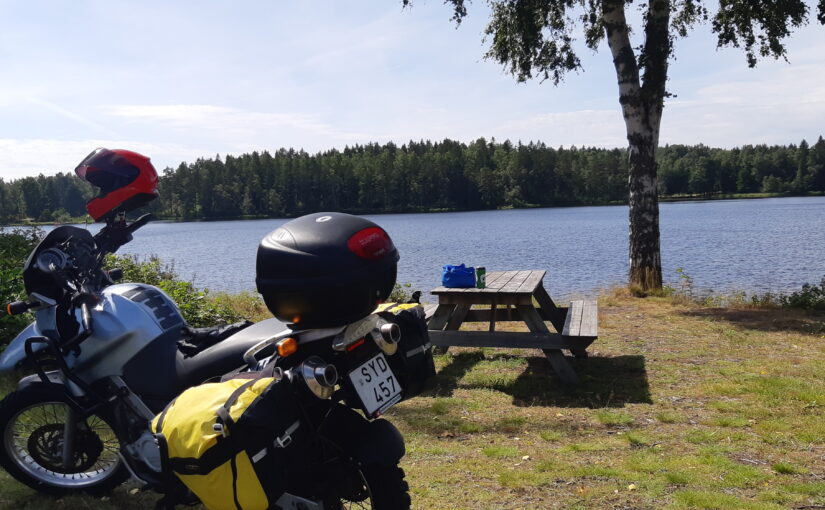 Gravel wasn’t something that I went out of my way looking for in the past. The perfect road used to be smooth and winding tarmac but while living in England I gravitated more and more towards the adventure segment of motorcycling. When Christopher started riding, his interest was geared towards the smaller roads and exploring, rather than following the asphalt ribbon.

We did some light trail riding (typically called greenlaning in local lingo) while in the British Isles and this lead onto getting equipped with a lighter bike, trading the Versys for the GS and then onto better tyres, putting on the Heidenau Scout. Lastly, better boots were purchased, and I now walk around like a squeaky robot in my Sidi Adventure 2 (but they are amazingly comfortable while riding, and have protected our ankles really well so far).

This summer Cool Cat, my blue GS, got a pair of Heidenau tyres as well, and crash bars too. Then I went out looking for gravel. In Sweden, unlike some other countries such as England or Spain, gravel roads are quite frequent in the countryside so enjoying riding them is a huge benefit. My native region, Värmland, has especially many gravel roads (and a strong tradition of rally driving too). As I mentioned in my previous post, the gravel road no. 673 in Värmskog (up to the bakery and beyond) is even a kulturminne, cultural landmark.

I ventured out on some stretches of the Swedish TET and, unlike the Prades mountains in Spain, where Christopher and I were riding TET earlier this summer, it was largely gravel roads, and some forest roads (we also call these tractor roads as they are made by and for forest machinery). In the Prades mountains we encountered mainly gravel or dirt trails, sometimes very gnarly due to rain earlier in the year and these trails require higher skills and greater precautions for us novices.

In Sweden, I both went out exploring for fun but also implemented gravel roads in my routes to go places.

Lastly, I’d like to mention the gravel course I took with SMC (the Swedish Motorcyclists Central organisation) where I improved my braking and cornering a bit. But there is only so much I can learn in a day and, unfortunately, I couldn’t join more courses during my stay in Sweden. It is so worth the money and time spent, I hope I can join them again next year.

I'm a passionate biker from Sweden. I love to travel, preferably on my motorcycle. Please let me know what you think of my blog! Post a comment or send an e-mail: asa@forza.greynorth.net View all posts by Åsa